Liquid Light was commissioned as a monumental projection and lighting piece for The Thames Festival 2001.

Liquid Light was commissioned by Adrian Evans for the 2001 Thames Festival. The centrepiece was lighting and projection onto the LWT Tower on the Southbank of the River Thames. This was one of a series of creative collaborations with Patrick Watkinson spanning the mid-1990s to the mid-2000s. It involved a massive temporary lighting installation crane-lifted onto the roof of the studios, along with two 7kW Xenon projectors fitted with scrolls of lithographic film – this was before the modern era of video and digital projection mapping!

The inspiration was to associate the broadcasting business of the tower with the movement of the river – electromagnetic and aquatic waves. Light and motion on the tower reflected in the river.

Downstream the project embraced Oxo Wharfe, by recolouring and managing their installed architectural lighting. To the West, the National Theatre fly tower was included with a gentle watery dynamic. The project was presented in sombre circumstances, just a few days after the ‘9/11’ attack on New York.

With thanks to James Banbury and Infantjoy for the later addition of music. 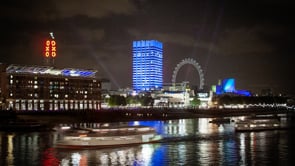 “Highlights of this month’s improved and extended show will include Liquid Light, the illumination over the three nights of the LWT Tower by light artists Simon Corder and Patrick Watkinson into what they promise will be a “monumental beacon of light and images”. – Luke Leitch, Evening Standard, 28 August 2001