“… with such an effusion of stage smoke that it’s a wonder anyone could sing.” – Patricia Maunder, ArtsHub, 16 July 2018.

The Palais Theatre is located in the Melbourne inner beachside suburb of St Kilda, with a capacity of 2,896 people it is the largest seated theatre in Australia. Built in 1927, it is one of the few early 20th century picture palaces to survive in Australia, and is included on the Victorian Heritage Register.

“Rodula Gaitanou directs in a way that is paradoxically restrained and bold, an attitude that filters into every aspect of the production. She encourages her villains to push into the grotesque but then reins in some of the opera’s most melodramatic turning points. It’s a tricky balancing act, executed with great skill. Esther Marie Hayes’ costumes play like a kaleidoscope of the 20th century, encompassing the gas masks of WW1, the sexual fetishism of the Nazis, and the militarism of communist Cuba. Simon Corder’s set – with its raked mossy hills and cut-out mountain – is simple but effective, constantly shifting mood under his brilliant lighting design. The whole thing is smart and unfussy, leaving plenty of room for that glorious music. – Tim Byrne, Time Out Melbourne, 16 July 2018

Opera can often look like a bastion of cultural and social conservatism, but every now and again a work emerges – or in this case re-emerges – to demonstrate the medium’s capacity for shock and awe. William Tell is a tale of resistance and ritual, of the things that simply will not be extinguished even in the face of brutality and barbarism. Gaitanou and Mills have tapped into the work’s magnetic power, and unleashed something truly resonant. Lovers of the form are going to rush from all corners of the nation to join this fight.” – Tim Byrne, Time Out Melbourne, 16 July 2018

For his performance, Armando Noguera was awarded ‘Outstanding Male in a Lead Role’ by OperaChaser Awards 2018. 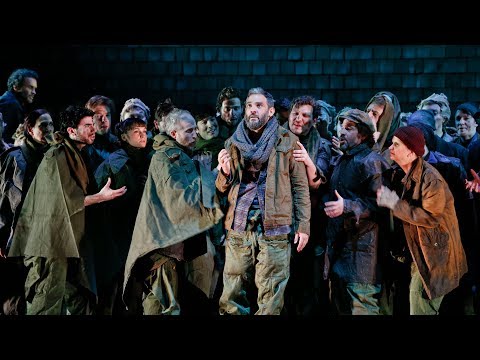